At the start of my career, in fact as soon as I started graduate school, I wanted nothing more than to work in a museum. The direct contact with antiquities, the chance to create displays for the public, the swanky receptions that I was sure accompanied exhibition openings: perfect. And I did wind up working in many museums, as a volunteer, as a paid student intern, on short-term contracts, and finally, a permanent contract. From my first behind-the-scenes experience at the Phoebe A. Hearst Museum of Anthropology in 1995, to the day I left my post as curator of the Manchester Museum Egyptian collection, with more relief than regret, I spent more than 11 years working in museums. In all that time, though, I never curated a temporary exhibition. I worked on major gallery overhauls, and I made a few minor tweaks here and there to individual displays. But coming up with a single idea to develop as a temporary show, with the aim of drawing in visitors just for that – nope, never had the chance and never learned the specific skills that it requires. Most of my museum work involved caring for large collections, which meant dealing with day-to-day inquiries, improving storage and cataloguing, and processing loans to other museums that were organizing exhibitions.

Applying for a Mid-Career Fellowship from the British Academy back in 2013 gave me the chance to revisit my curatorial past. To fulfill the public dissemination aspect of the fellowship – that is, how was I going to share my research beyond academia? – I came up with the idea of creating a relatively low-cost, high-quality, photography-based exhibition that could travel to small venues, or to small spaces within larger venues. Because my research is based on the premise that photography was a working tool in archaeology, and was not at all considered some kind of art form, I wanted to get away from the conventional manner of displaying photographs in frames on gallery walls, as I’ve discussed. I also wanted to serve local and regional museums near me – something which seemed a natural fit given that photographer Harry Burton grew up in Stamford, Lincolnshire, while lead excavator Howard Carter grew up in Swaffham, Norfolk.

When my fellowship application was successful for 2015, I had to deliver. I came up with a proposal and sent it to several museums, including The Collection in Lincoln, which had impressed me when I’d visited in 2014 while in this delightful cathedral city for a Museums and Galleries History Group conference. It’s in a wonderful modern building  halfway up Steep Hill, next to its older museum sister, the Usher Gallery. Archaeology curator and collections manager Antony Lee invited me up for a meeting, showed me their Courtyard Gallery, and convinced his colleagues to schedule the show for a nice, long run. It opened last Friday, November 10th, and will be on show until January 28th in the new year.

With the luxury of time that research leave – and only research leave – gives to us academics, I sat down with a plan of the gallery, some squared paper, a pencil, a straight edge, and a head full of ideas from my research, which was well underway by then. Having seen the space, and knowing the Tutankhamun photographic archive as well as I do, I could visualize a series of same-sized panels placed rhythmically around the walls. I hoped the visual effect would lead visitors from one to the other, letting them focus on the photographs while taking in as much or as little of the supporting text as they wished. I selected and grouped the photographs in a meaningful order. I even had four working themes, one for each wall – but in the end, I think visitors go where they want to go. An exhibition has to have enough structure to get an idea across, but enough flexibility so that visitors don’t need to follow a set order or read every label (who does?) in order to get the curator’s idea. Or, indeed, come away with their own idea instead.

This is a slightly dark shot of the first and brightest wall, since it benefits from a large window into The Collection’s courtyard. The introductory panel is a perfect square twice as wide (120cm) as the rest of the panels. The 400-word text is probably twice as long as it should be, but I couldn’t whittle it down more than that and say what I thought was important for people to know. I hope the bold paragraph headings help people who do want to read some of it pick and choose which bits are most interesting to them. 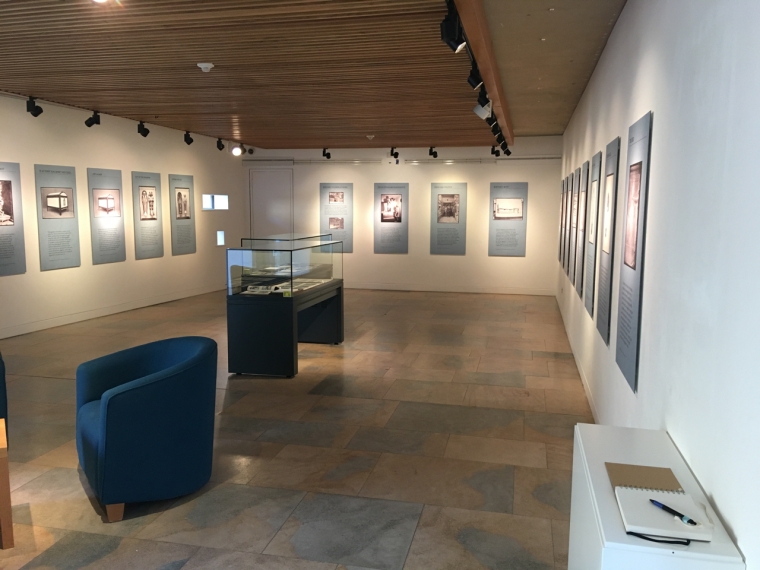 Around the other three sides of the gallery, as you see above, that sense of rhythmic repetition emerges, which I hope we can recreate when the exhibition moves to the Museum of Archaeology and Anthropology in Cambridge in June. On the left wall in this image, we had to hang the panels closer together than I’d planned, since I’d forgotten about the two small windows. These can be covered up, but the Lincoln curators and I thought they made a nice feature, so we did a little bit of bunching up instead.

The back wall, with four panels, is one where I hope visitors will spend some time. It features the Egyptians whose work was absolutely crucial to the excavation, including some of the politicians who helped make it happen and who (as politicians do) used it for their own image-making as well. These four panels also introduce an idea that seems ever more important to get across these days, by pointing out the endemic racial prejudice that shaped relationships between Western archaeologists and the Egyptians they worked alongside every day. This influenced how archaeology characterized race in antiquity, studied human remains, and created misleading models of cultural ‘progress’, where white Europeans always came out on top. On a lighter note, I made an evening excursion to Paperchase in Lincoln to buy a comments book, some pens, and some light blue washi tape to coordinate with the panels. Never say that I lack an eye for detail. 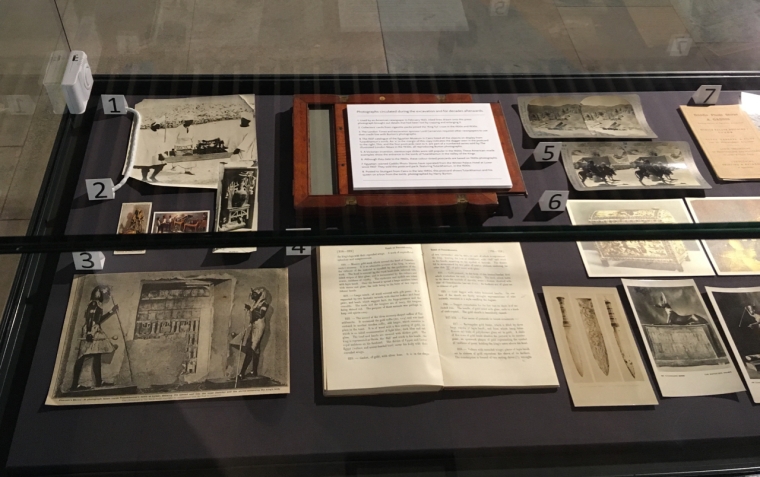 Two beautiful, identical display cases positioned in the centre of the room gave me a chance to get back on more familiar territory: laying out objects and positioning labels, instead of hanging things on walls. One case shows some newspapers and magazines contemporary with the 1920s dig, while this one expands that to look at how Harry Burton’s photographs, and other photographs of the tomb, circulated for decades afterwards. Many of the items on display are my own – things that I’ve acquired in the course of my research. Others have been lent by friends and colleagues. To offer something a little more three-dimensional, I’ve rested the labels on top of early 20th-century dark slides – the holders, here made of mahogany (I think), that protected glass  negatives from light until they were safely in the camera body. By releasing a brass latch, the photographer could lift up the sliding cover and expose the negative, then shut it back down to end the exposure. I hope Burton had much lighter, slimmer examples than these with him in Egypt, but I also hope these lend an evocative touch to the show.

Many years after I first thought of becoming a museum curator, and several years after I gave up museum curating for good, how does it feel finally to have curated a temporary exhibition? Pretty good, in fact. I’m relieved that everything arrived safely and fit the space (apart from the little windows!), and I’ve surprised myself by how good it looks in the gallery, from the scale of the panels on the walls to the way the colour (warm blue!) tones with the wooden ceiling feature and stone flooring. It was a real pleasure and a welcome change of pace to work together with Antony and his colleague Dawn Heywood, curator of art, getting everything installed. Museum work is physical work, and at small venues, there often are no technicians available to help. The three of us did the entire installation. Antony was a dab hand brad-awling where the screws should go, and I followed behind, screwing the panel battens to the wall. Dawn even took on some white wall paint touch-ups while bravely wearing black. It reminded me of one thing that I do miss about museum work: the camaraderie.

What will the public make of it, that’s the question now. I’ll keep you posted – and if you’ve visited the show, please feel free to use the contact page on this website to get in touch. Meanwhile, it’s back to my day job: teaching, emails, marking, emails, advising, emails, sitting in meetings, emails, and repeat. Not a brad awl in sight, and more’s the pity.