A rollercoaster, a water chute, a dance hall, and a Chinese restaurant: what did any of these have to do with the tomb of Tutankhamun? They were all part of the British Empire Exhibition held at Wembley in 1924 and 1925 – where a reconstruction of the tomb’s Antechamber and its treasures (as they were invariably known) could be found at the far side of the 40-acre amusement area. 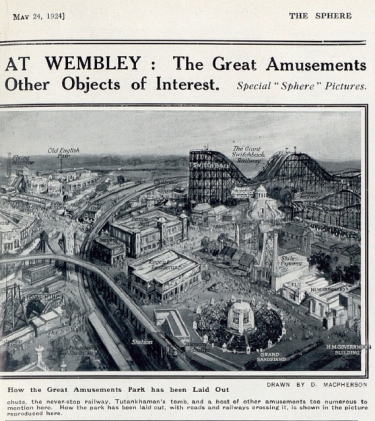 Elsewhere at the Exhibition, a ‘Palace of Beauty’ sponsored by Pears, the soap manufacturer, featured lovely young women posing as famous ‘beauties’ of the past (Helen of Troy, Nell Gwynne), though I strongly suspect the ‘Palace of Engineering’ did not give visitors a chance to ogle handsome young men playing Isambard Kingdom Brunel. Instead, each part of the British Empire contributed some kind of display, somewhere. Canada, for instance, was particularly proud of its railways.

These combinations of education and entertainment, government and commerce, and British-ness with the rest-of-the-world, may seem a little strange today – but they are the precursors of our own ‘leisure industries’. We probably take for granted shopping malls like the Trafford Centre in Manchester, with its Abu Simbel-inspired food court, or the way zoos and attractions like the Eden Centre use ‘primitive’ or ‘tribal’ objects and architecture to stage their displays of animals or plants from Africa, Asia, or South America.

But I would argue that that’s the same sort of thing the inclusion of Tutankhamun’s tomb was doing in the British Empire Exhibition almost a century ago. It was part of the day-to-day, taken-for-granted inclusion of ‘the Other’ into what it meant to be British. Most of the rest-of-the-world that you could visit at the Empire Exhibition was British, remember. Hong Kong, evoked by that Chinese restaurant; Canada with its railways; or Bermuda, represented by a reconstruction of Irish poet Tom Moore’s house (‘Walsingham’, he’d called it, after the medieval pilgrimage site in my home county of Norfolk).

In other words, those ‘others’ weren’t ‘other’. They weren’t foreign, not entirely. They were British, too, woven tightly into the fabric and identity of British society despite the revisionist rhetoric of nationalist politics and the right-wing press today. Being a subject of the British Empire had many legal and practical implications, after all, which is why so many troops from what are now India, Pakistan, and other colonies fought and died in both world wars.

At the time of the British Empire Exhibition, Egypt itself wasn’t any longer part of the British Empire – and its relationship to the Empire had always been ambiguous, since until the outbreak of World War 1, it was already part of the Ottoman Empire. Egypt had been granted independence from Britain in 1922, although British administrators still kept a close eye on its internal affairs and still controlled its foreign affairs and the all-important Suez Canal. Rather than an official representation of modern Egypt, then, the reproduction of Tutankhamun’s tomb was a piece of pure entertainment, like the ‘Palace of Beauty’ and the amusement park rides. It proved to be one of the most popular attractions, seen by many of the 27 million visitors the Exhibition attracted over almost two years in west London. Among those visitors were the tomb’s photographer Harry Burton and his wife Minnie, who mentioned their excursion in her diary (see the entry for May 27) – though she doesn’t mention visiting the tomb reproduction. They’d both seen the original in person, practically from the start.

The replicas, many of which are now in the collection of Hull Museums, were made by the firm of architectural sculptor William Aumonier – part of a family of artists active in London in the late 19th and early 20th centuries. One of them – the reproduction of the hippo-headed funerary couch, representing the protective goddess Taweret – made a spectacular addition to the Ashmolean Museum’s Discovering Tutankhamun exhibition in 2014. 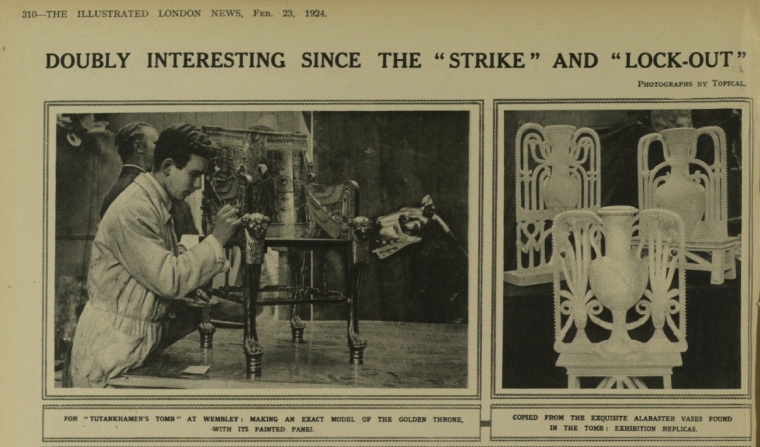 Howard Carter wasn’t so convinced. He tried to stop the tomb reproduction from going ahead, by claiming the Aumonier’s work infringed his contract with the London Times, granting the newspaper exclusive rights to Harry Burton’s photographs. But Carter lost his legal complaint. The Wembley reproduction was based on photographs, drawings, and descriptions provided by Egyptologist Arthur Weigall, who had covered the tomb’s discovery for the Daily Mail. Weigall had warned Carter, in a collegial spirit, that Carter was making a mistake by signing the Times contract and behaving arrogantly towards the Egyptian government and press. Carter paid no attention.

As it turned out – and as the Illustrated London News headline above confirms – the Wembley reproduction of the tomb opened just as Carter declared a ‘strike’ in the spring of 1924, when his long-simmering tensions with the Egyptian government and its Antiquities Service reached boiling point. That makes it all the more interesting to think about issues of ownership, both real and abstract. One of the tensions between Carter and the Egyptian antiquities authorities concerned the very copyright in press coverage and photographs that Carter was trying to protect in English courts – but another was the question of whether the Egyptian government would give Carter and the Carnarvon family any of the objects from the tomb under the ‘division’ system that Western archaeologists had come to expect. The question of cultural ‘ownership’ – were do we imagine a find like Tutankhamun ‘belongs’ – adds yet another layer.

That’s why, when I come across old news coverage of the Wembley tomb reproduction like the snippets I’ve included here, I can’t help but wonder about the cultural values and historical assumptions that were at its heart – and whether they still inform Britain’s ideas about its former colonies and protectorates today. Tutankhamun as a fairground attraction? He still makes a popular subject for all kinds of kitsch commercial products and speculative TV documentaries, which seem similar to me. King Tut may be the quintessential symbol of ancient Egypt – but he’s still experienced like the displays in the British Empire Exhibition. A little exotic, maybe, but ‘our’ exotic. Step right up.